I was doing some research on the internet, and on Wikipedia, some people seem to think that Mirage is the next and final world in our Morganthe Story. I want to know if you guys would agree with this, because if people are right, and Mirage is the next world and takes us up to level 100, I will buy everyone on my friends list who I play with often a Mirage pet. I'm not even joking. I will save up and buy the crowns to buy the 20 some pets. Would you guys agree when we think Mirage is the next world after Azteca? I'll post the link to the mentioned worlds section of the Wikipedia page here.

Also, have any of you heard the Azteca Post Apoocalypse theme, i haven't and I would like to. If you can find me the theme or record it and upload it to youtube so I can hear it, I will give you my undying love.
Posted by Patrick EmeraldPyre at 9:06 AM No comments:

I've had a revalation into what I think would be a good idea for a new world:

Romanya:World based on time just before fall of roman empire.

"Romanya is a magical metropolis that has a few rare magic residues over from when the world was first created. Believe it or not, the Drake Brothers were raised and trained in magic here. Wizards arrive to Romanya to collect the DNA Splicers, a powerful magic artifact that could be the key to defeating Morganthe. Wizards arrive to find the city of Rimon in havoc. Morganthe's minions are terrorizing the townsfolk and residents of Romanya, slaves are rebeling against their masters, the Perusian(from the world of Perusia) Army wants the people of Romanya in bondage and slavery, and a new, untested, unproven emporer(Emporer Tikus) sits in the palace, corrupted by dark magics, courtesy of Morganthe. Wizards meet Morganthe's long forgotten older brother, an Avalonian knight named Nari. However, there is one secret about your wizard's relationship with Morganthe, one that could cost the Council of Light, Morganthe, and everyone in the spiral all hope of driving out Shadow and Light."

What do you think overall though?
Posted by Patrick EmeraldPyre at 2:10 PM No comments:

The End is Near

I finally got into Ghost Avalon today and fought Young Morganthe. I tryed to solo it a few times, didn't work out.

After a few minutes on twitter, i found some people to help, I want to say thanks to Tatiana ShadowFlame for pulling in the help: 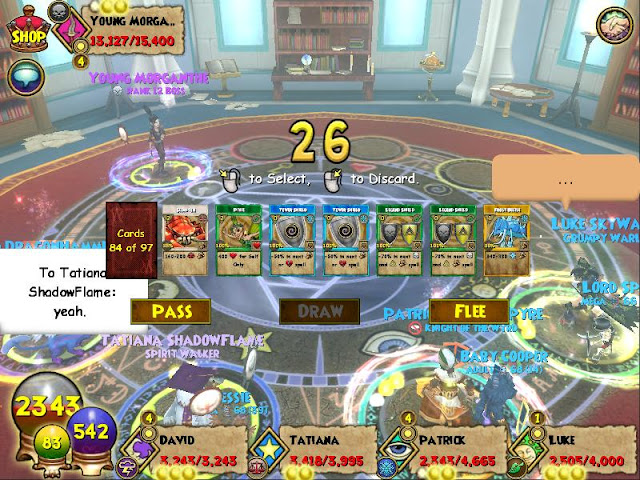 Posted by Patrick EmeraldPyre at 2:32 PM No comments:

We took first in general effect, watch this and give me your opinion:

My Bands Possible show next season

Our band director played me the opener for the show he was looking at for next year a couple months back during Marching Season. I loved it then, because I was orriginally planning on marching flute or piccolo next year. Then I decided to do colorguard, and I did a bit of snooping around. I found our show, and our colorguard instructor, CoachM, will have a bit of fun with this. Since none of you live near Idaho,I deem it safe to post a link up.

I want you all to comment on this and tell me what you think of the show:
Movement 1=Opener
Movement 2=Ballad
Movement 3=Closer

Leave a comment and tell me what you think.

(P.S. You must listen to ALL 3 movements before commenting. Sorry, but I'm a bit of a Ruleslayer about this. Tell me what you think,honestly. :) )
Posted by Patrick EmeraldPyre at 1:57 PM No comments:

Even for those of you who hate spoilers(if you hate them, don't watch this), you need to watch this, it reveals Morganthe's mystery servent and the end of the world of Azteca, final dungeon, too good to miss:

Hello Wizards. I might like to inform you of the new world (although I have a sneaking suspicion that you've heard of it already, Azteca! It has a theme that centers around Dinosaurs.

I'm here to admit, I've been dreaming worlds after Avalon for a LONG time, like, oh I don't know, since Avalon came out. I will post my ideas here before I introduce the new world:

Now, into the nitty gritty of it. Kingsisle has obviously introduced Azteca to succede Avalon as our Morganthe world. Leah Ruben even gives us a teaser:

"A mysterious person from your wizard's past will be returning to make a dramatic reappearance. Players WILL definately recognize this character": 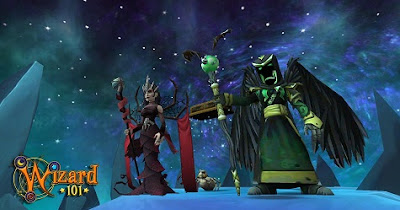 Massivley Arcitle
Massively posted an arcticle on the new world of Azteca only a short while ago, read the arcticle here, i find it to be a rather interesting read:﻿http://massively.joystiq.com/2012/10/24/wizard101-invites-us-to-the-dinosaur-world-of-azteca-embargo-1/

One thing is for sure though, this world is a keeper FOR SURE. Only one other game could match this, well more like games, and Pokemon Black2 and White2 don't even COMPARE to a world the size of Azteca.

New spells, new gear, new pets, even new houses are in store for us. I think that that mystery person is Malistaire, but I don't know. See that coffin in the background near the portal looking thing, it might be Morganthe's long lost son, if she ever had a kid. I'll post more pictures down below.

In my next post(unknown when that will be posted), I will be discussing the new Level 84 Star spells, 86 Sun spells, 88 School spells and 88 Moon Spells.

Patrick EmeraldPyre a.k.a The Vanquisher
(P.S. If any of you have a recording of the new Battle Theme for Azteca, please tell me, cause I want to hear the theme. Ok, now seduce your thoughts on these:) 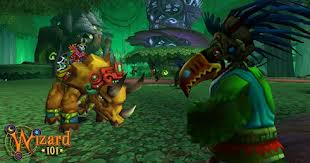 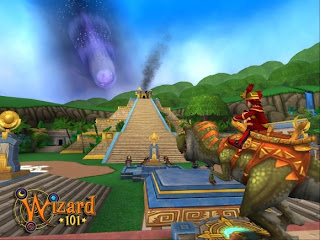 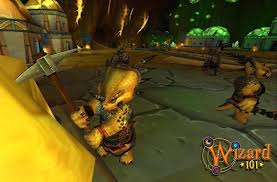 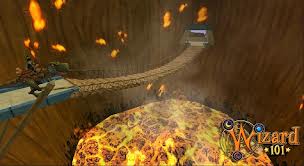 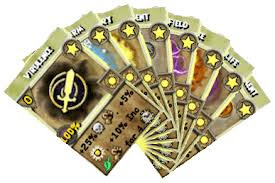 Posted by Patrick EmeraldPyre at 1:55 PM No comments:

Patrick EmeraldPyre
I'm a level 70 Ice wiz, who is working throught my quest log to empty it out. I have the quest to get into Avalon, but I need Crowns to get there.